Looking for a cultural experience like no other? The Florida Renaissance Festival is back and celebrating 28 years! From entertainment to memories you’ll never forget, the festival is the place to be! All Lords and Ladies are cordially invited to step back in time during seven weekends of adventure at the annual Florida Renaissance Festival. New themed weekends, new entertainment acts and more await those who look fondly upon years past. All are invited to the grandiose event taking place February 8th through March 23rd at Deerfield Beach’s Quiet Waters Park.

For the fifth year in a row, the timeless Florida Renaissance Festival will offer seven jam-packed themed weekends to ring in its 28th season. This year, the celebration kicks off with a return to the English Monarchy and Henry VIII is back! Prepare for a greeting by jesters, jugglers, and jousting knights upon entering the gates, and sweet melodies can be heard from every corner of the kingdom. It’s a full day of entertainment where the entire family can marvel at fan favorite acts and performances that include immersive and interactive, real audience-participation scenarios. Join in on the fun with human powered rides, artisan craft shops and enough food & drink for a royal family feast!

One of the nation’s most beloved events, with over 100,000 annual attendees and more than two million people having participated over the festival’s tenure, the Florida Renaissance Festival has devoted 28 years to capturing the essence of the Renaissance through entertainment and living history.

“We’re thrilled to introduce new themed weekends this year for everyone to participate in and enjoy. We also have new acts and performances that we carefully seek out and add to the festival for our patrons to enjoy,” says Bobby Rodriguez, Founder and Producer of the Florida Renaissance Festival. “The Florida Renaissance Festival wouldn’t be a great success every year without all of the loyal subjects who join us to celebrate. It’s a wonderful way to celebrate history and culture while learning something new at the same time.

Rodriguez has helped the Florida Renaissance Festival set the standard for all festivals of this nature by going “beyond Renaissance.” Booking acts sprawling from the Orient to Africa, Rodriguez has brought the Festival to new heights, continuously incorporating new experiences. Led by his forward-thinking, it has expanded its arsenal of avant-garde performances and interactive weekends. 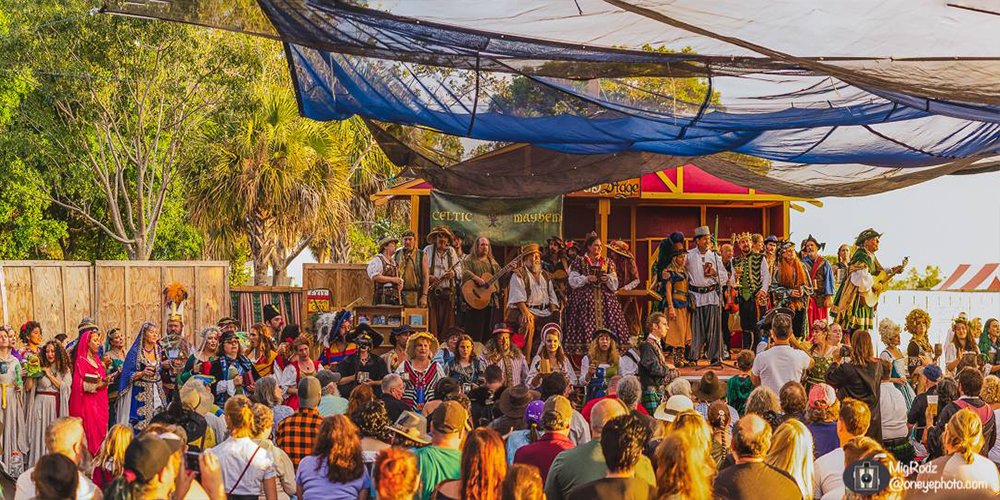 In this 28th Season of the Festival we’ve decided to go back to the beginning with the undisputed King of the Renaissance, King Henry VIII.He’s back and he’s better than ever, bringing new and exciting entertainments, flavorful feasts, merry music, delightful diversions and wonderful wares of artistry and craftsmanship! King Henry and his lovely and clever wife Anne, Princess of Cleves and Queen of England, both bid you Welcome to the Renaissance!

Norwegian brothers and sisters emerge from the mist on an icy wind, battleaxes in hand, donned in leather and fur during this Chilling Weekend. Courageous warriors unite!

Time Travelers’ – A Revolution of Invention - February 22nd and 23rd

Dedicated to adventures across the centuries – bring your brassie Victorian “gears” and join us for a “Steampunkin” good time as we travel back in time. A time of British Victorian fashion, the American Wild West, and steam-powered machinery. Don a top hat, vest, breeches, and monocle for this fantastic weekend!

Will chaos reign and wickedness rule, or will good fortune and the kindness of man prevail? Are you a Hero or a Villain? No matter your choice of costume, it’s all about two sides of the same coin, and remember that without darkness there can never be light. Let the Warriors of the Light and the Armies of the Darkness meet in this epic weekend of eternal battle.

Argh Mateys! All hands on deck and Avast Ye! Dead men tell no tales – the secret is out and the Swashbucklers and Sirens weekend promises to not leave anyone left at sea. Buccaneers will plunder and Sirens will serenade – gather your crew and come search for treasure while exploring unknown lands.

Celebrate the Celtic traditions of the Irish, Scots, Cornish and Welsh during this merry themed weekend that honors the People of the Isles. Sing, dance and join your tribesmen in your finest kilts while bagpipes blare throughout the Shire.

Muggles, witches, wizards and fantastical creatures abound at the most magical final weekend of the Festival. “Expecto Patronum!” your patronus and “Wingardium Leviosa!” your butt off the couch to come join us! Bring your wands, potions, and magical treasures to join in the fun and games.

The 2020 season also includes a variety of fan favorite acts and performances with an invigorating entertainment lineup that includes something for everyone.

During our first two themed weekends, search out the daring escape artist Dr. Judas Lynch and his kooky assistant Ms. Magnolia Strange! This comedy & escape performance is not to be missed! When they are not on tour or at a festival, they can be found in and around the St. Louis area with their variety of tricks.

This comedy-adventure show, is filled with thrills, chills and heroic hijinks. Meet the dynamic sword fighting duo and join in on the fun as they are looking for new heroes to make it to one of their Guild Recruitment meetings! Or at least helping them settle some Dueling Disagreements! Adventure onward!

MooNiE the Magnificent is an immersive silent comedy experience that engages the audience by using whistles and gestures to put everyone in stitches. Adding to the comedy is MooNiE’s mesmerizing balancing and juggling skills, creating an enjoyable family-friendly show that has something for everyone.

When MooNiE teams up with the edgy & sarcastic BrooN, there’s no telling what you’re in store for! MooNiE and BrooN are a perfect double act that clash as well as compliment, creating the ideal recipe for painfully good comedy where no one will know what they’re going to do next, including them. Catch them during the final five weeks of the Festival!

Prepare for an adventure - Wolgemut performs historical music on original instruments such as the medieval bagpipes, shawms and bombastic drums as well as quiet instruments like the flute, medieval fiddle and harp. Playing at international festivals around the world, Wolgemut promises to leave everyone “in a good mood” which is the translation of his name!

Come witness the heart-pounding medieval live-action stunt show. DeBracy Productions combines trick riding, vaulting, chariot racing, death defying stunts, full contact jousting and a gladiator style spectacle. Experience a spectacle where the winner takes all, princess, kingdom, and treasure, but is it all worth it!?

Prices range from $28 for adults and $12 for children ages 6 to 11 years of age. Children 5 and younger are free. Special seasonal passes are available for $139 (adults), $69 (children) and group ticket rates are also offered. While costumes are not necessary for admittance, thousands of people each year enhance their experience by donning garb from the Renaissance era or participating in one of the festival’s special themed weekends. For tickets and more information visit: www.ren-fest.com.