THE MUSEUM OF GRAFFITI OPENS DECEMBER 5, 2019 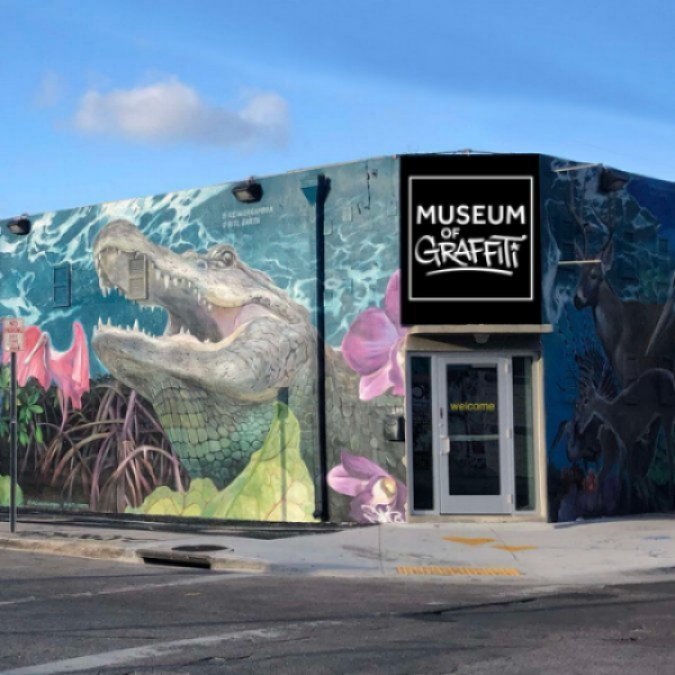 “Art is an evolutionary act. The shape of art and its role in society is constantly changing. At no point is art static. There are no rules.”- Raymond Salvatore Harmon

We are excited for the new addition to Miami’s art scene coming December 5th, just in time for Art Week 2019 - where all the best art from around the world comes to South Florida. The Museum of Graffiti is a new contemporary art museum and the first institution of its kind to present the history of the global graffiti art movement opening in the heart of Miami’s vibrant Wynwood neighborhood.

For some it is the largest and most democratic art movement the world has ever seen, for others it is unwanted visual pollution. But graffiti and street art now has a permanent claim on the art world: an entire museum dedicated to the genre.The Museum is the brainchild of lead curator Alan Ket, a well-known graffiti artist, art collector, and historian and his business partner, Miami native and prominent attorney, Allison Freidin. Centrally located in the epicenter of color and creativity, amongst the instagrammer’s paradise of Wynwood, the space is covered with vivid murals and destined to become a major cultural hub. The museum encompasses a permanent exhibition, two feature exhibition galleries, a rotating site-specific immersive installation and a gift shop.

Once ephemeral -scrawled on walls and subway trains, only to be dissolved away by the cleaning crews -graffiti has gone mainstream with a vengeance.To fully appreciate the current position of the movement it is essential to know and understand the work of the original graffiti artists, who started tagging in the New York subways in the early 1970s and early '80s.The museum’s permanent exhibition will feature paintings, mixed media sculptures, and interactive installations by some of New York City’s earliest graffiti writers including Rammellzee, Riff170, Phase2, Tracy168, Blade, Noc167, 80’s legends including Sonic, Dondi White, Zephyr, Mare139, Lady Pink, Doze Green, Delta2and Miami artists such as Abstrk, Crome, Raven, Verse, Rasterms, Jona Cerwinske. A comprehensive timeline illustrated with artwork, photos, video, and ephemera will provide a historical context for the work.

The museum’s special opening exhibition will feature works by Niels Meulman, a.k.a.Shoe. A graffiti pioneer from Amsterdam, Shoe could be described as a poet on canvas, and someone who keeps pushing the boundaries of urban art. Meulman, is best known as founder of the Calligraffiti movement, his unique twist on an art form that mixes traditional calligraphy with the rawness and grittiness of graffiti.The exhibition entitled, Negative Space, will feature exciting new works by the artist presented in an immersive environment created by Meulman for the museum. According to the artist, “ Negative Space is an attempt to exorcise the negative energy that seems to rule everything around me lately.” Negative space, the space around and between the subject of an image, defines the boundaries of the positive and brings balance to the canvas so therefore is just as important. In this exhibit SHOE is reversing his perspective. Meulman says,“Every stroke I paint –calligraffiti or otherwise–creates a positive shape, but instantly, also a negative one. To paint and focus on these negatives is similar to a sculptor carving

out a block of marble. Even when invisible, we should see that it is the negative space keeping the positive together.”

On Friday, Dec 6th RISK, the American contemporary street artist, graphic designer, philanthropist, entrepreneur and the founder of the Third Rail art series, will be at the Gift Shop of Museum of Graffiti to sign and embellish exclusive prints of his work. The ProgramsThe Museum of Graffiti will host an ambitious series of public programs. In addition to the upcoming opening to coincide with Miami Art Week, the museum has plans to hold monthly events including print signings, artist guided tours, film screenings, painting demos, limited edition product launches, and a series of art talks featuring the artists whose works are represented in the collection.

Education is a central component of the museum’s programming plan. The Museum of Graffiti is dedicated to being the go-to source for students, educators, and tourists on the evolving graffiti and street art movement. “We are delighted to announce the opening date, and hope visitors will learn how graffiti has transformed sleepy, industrial neighborhoods into world class destinations. It is time to celebrate the artists and their contributions to the art world and our communities,” said Allison Freidin. “This is the most culturally significant art movement of the second half of the 20th century," Ket added. "This art is about raw energy, rebelliousness and authenticity, and we are excited to share its past, present, and future with the world.”

The Museum of Graffiti gift shop will feature several limited-edition artist collaborations and a curated collection of toys, apparel, books, prints, accessories and specialty items developed exclusively for the museum. Guests can stop by the museum shop’s denim bar and customize their new jean jacket with selection of artist made pins and patches before they leave. Other items on hand will include exclusive limited edition resin spray cans by Stash 2, exclusive limited edition umbrellas by Ahol Sniffs Glue, Janky Series 2 Blind Boxes and limited edition Phase 2 skate decks.

The Museum of Graffiti will be open from 11AM –7PM daily. Admission tickets are $23 for Adults, $15 for Students, Children 5 and under are free. Tickets are available online or at the door and include access to all museum exhibitions. For more information, visit museumofgraffiti.com 229 NW 25th Street, Miami, FL 33127.