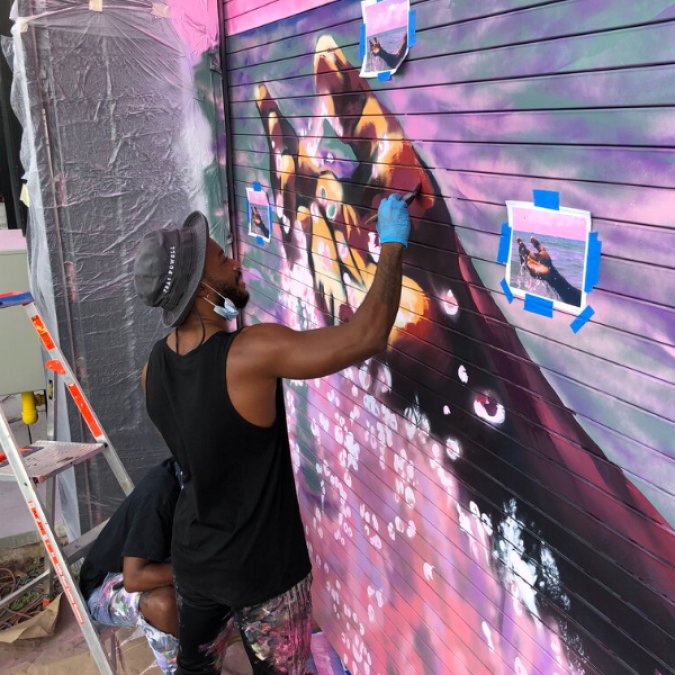 As Wynwood continues to grow with residential and mixed-use development projects, it seems natural that developers would turn to Miami native and Wynwood mural art pioneer Jessica Goldman Srebnick, co-founder of Goldman Global Arts, when commissioning artists for work to adorn their building’s exteriors.

The development of Wynwood’s art-centric, working class neighborhood into a mid- to high-rise residential and commercial area has been evident over the past few years. Luckily, development companies changing that landscape are including local mural artists in their plans.

At Sterling Bay’s new 545wyn, a Class A office space, they commissioned local mural artist Mojo for two murals, upon the recommendation of Goldman Srebnick.

“I proposed Mojo for 545wyn as it was important to our client Sterling Bay to have a local Miami artist who would add to the story and authenticity of a neighborhood known worldwide for its public art and differentiate a first of its kind office product in a highly creative community,” said Goldman Srebnick.

For Mojo, being chosen was a tremendous honor and the encouragement Sterling Bay development and Goldman Srebnick gave him made the project that much more special.

“Jessica and the team encouraged me to utilize my artistic voice and create two stories centered around innovation, growth, joy, and entrepreneurship. When we presented the concepts to Sterling Bay, their team was incredibly supportive,” said Mojo. “It is awesome to know that corporate companies and real estate developers are accepting of everyone’s American Story; genuinely exciting and heartfelt.”

Goldman Srebnick was also drawn to Mojo’s work because he uses it to advocate for minority groups and artists of color.

“Following a heartbreaking summer that sorely lacked justice and equal rights, I made a promise to myself as a curator to do better in my support of artists of color. I dug deeper into my own community and discovered the work of Mojo,” she said.

She goes on to say, “the work was powerful and focused on subjects of color, predominantly men of color, and I found that the work stayed with me long after the images were gone. I wanted to find ways to work together.”

Mojo, whose name is Anthony Reed II, sees his art as a way to spread a social message. It is evident on his website where his motto “Impacting Lives One Color at a Time” is right there, under his name. Mojo wants his mission to be present in all his work.

“My cultural background highly influences my art. Being an African American man, I experience the world quite differently. I made it my mission to create from my experiences and share the images far and wide,” said Mojo.

The Black Lives Matter Movement only further cemented his mission and is present in much of his work.

“Something extremely important to me is positively representing people of color. It’s supremely paramount to have representation exhibited in all facets, especially art and I uphold that responsibility to create positive imagery in all of my work,” he said.

Being approached by Jessica and ultimately, commissioned by Stirling Bay developers for 545wyn was the perfect match.

Goldman Srebnick first worked with Mojo on a campaign they curated with Michelle Obama’s organization When We All Vote. The campaign’s directive was to amplify the important message of voting.

“Mojo created an original image seeped in the history and sacrifice of the voting movement and one that not only amplified that voting matters, but that when we all vote, democracy works. It was an incredibly successful project, and it was a joy to work with someone as professional as Mojo,” she said.

The 545wyn project has a special personal connection for both Goldman Srebnick and Mojo artist. Each represent a story that others can connect to.

One mural represents a family’s journey from Cuba to South Miami, the city where they created a business and a life.

Goldman Srebnick says, “it’s a story of courage, of immigrants that started a business that endured for 50 years before being developed into 545wyn. That story belonged to my husband’s grandparents and the subject of one of the murals.”

The other mural features an image of Mojo’s son, a young black teenager who experiences his first swim in the ocean. “Mojo titled the piece, KINGShighway, but to me it is about a new beginning. One that embraces individuality, potential, and the hope of a new generation. There is purpose to the art. That is what people will experience in this project,” she said.

Featured on the exterior garage doors of the 545wyn building and titled the 545wyn Mojo Mural Collective, these are Mojo’s descriptions of each: 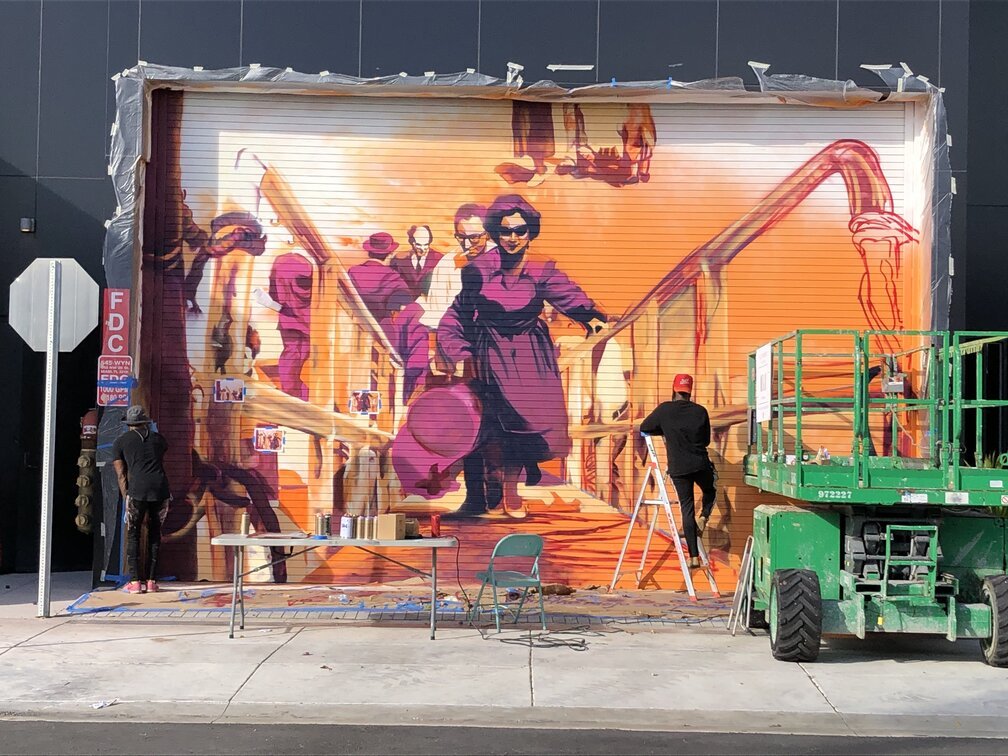 “El Viaje” Door 1: “El Viaje” in English translates to “The Journey.” This mural concept is a snapshot of Sophia, a Powerful Woman leaving Cuba to begin her new life in the United States of America. After losing everything in her native country, she finds the courage to pack her belongings and try her luck in America. As Sophia stands toe to toe with her great challenge of “starting from scratch”, she creates a Zipper Manufacturing company and sends her son to one of the best colleges in the country. She is the personification of the American Dream. A truly special and powerful immigrant story. 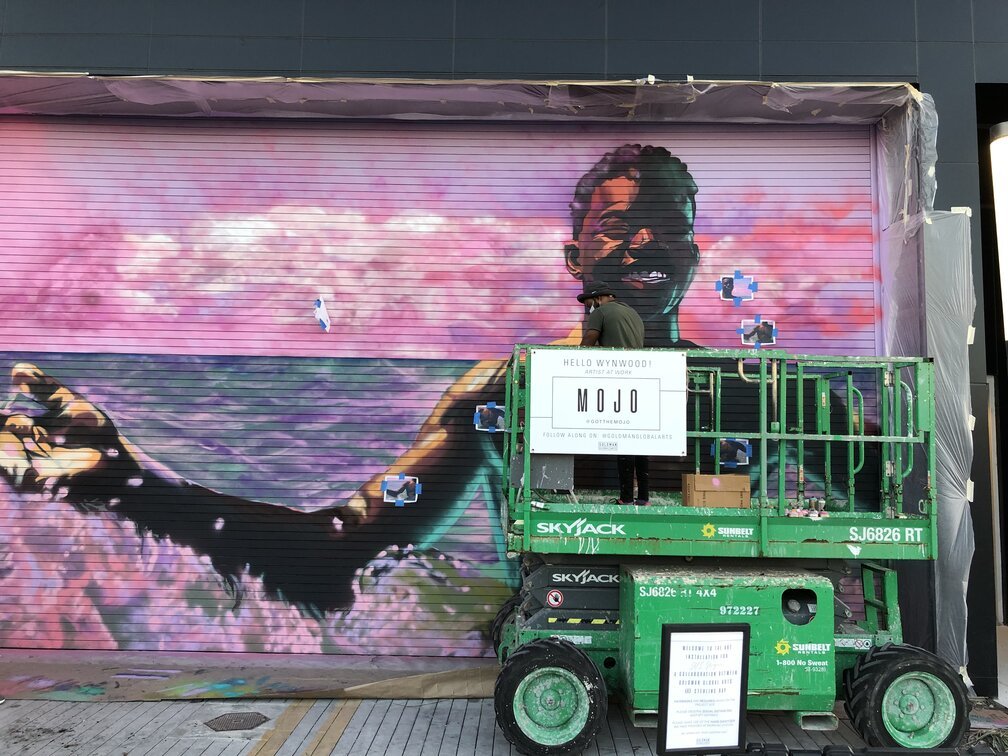 “KINGShighway 1” Door 2 is an exhibition of freedom and growth with Mojo’s teenage son, Jaydin. For Mojo’s birthday weekend on Sept. 26, he flew his son to Miami for the celebration. Upon visiting North Miami Beach, Jaydin enjoyed new experiences like swimming in the ocean, eating beef empanadas and digging his feet into the sand. Witnessing Jaydin’s pure joy, Mojo briefly forgot about the global pandemic.

Both pieces showcase what inspires Mojo’s work, telling people’s life experiences through is art. He begins by visualizing images that capture the essence of the story which coupled with his own journey for self-mastery allows him to create from a vulnerable place.

“Ultimately, I hope people find joy, peace, inspiration and endless amounts of curiosity in my work. We, as a society, have so much in common. The more we realize that the better our country will be,” he said.