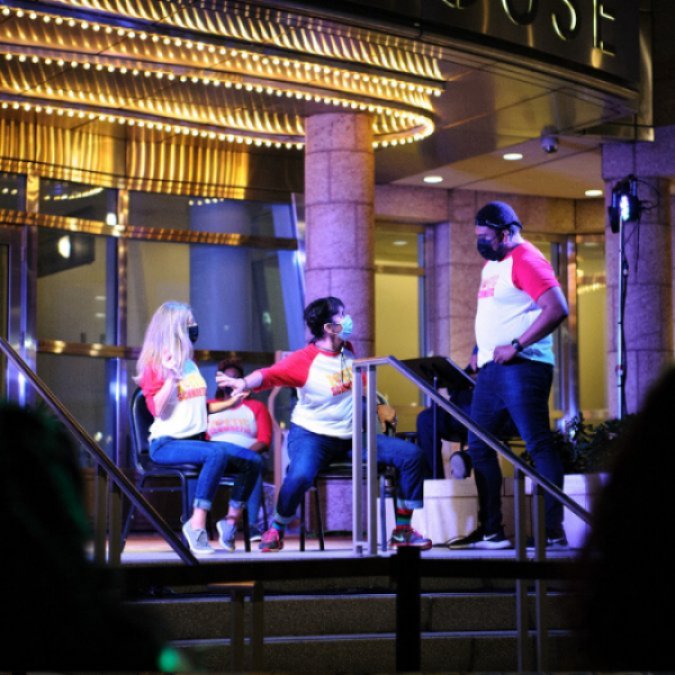 While a widespread return to indoor theater won’t happen yet, some companies and venues have figured out creative ways to come back sooner.

Hence the presence of the fast-paced improv show, “Zoetic Schmoetic,” on the outdoor Thomson Plaza at Miami’s Adrienne Arsht Center for the Performing Arts over the weekend.

Zoetic Stage, based in the Arsht’s Carnival Studio Theater since it launched in late 2010, has built its reputation on impeccably intimate productions of Stephen Sondheim musicals, challenging dramatic fare such as “The Curious Incident of the Dog in the Night-Time,” and world premieres by founder-playwrights Michael McKeever and Christopher Demos-Brown.

But its return to monthly performances after a year of pandemic isolation is strictly for some much-needed laughs.

García along with Clay Cartland, Jeni Hacker, Daryl Patrice, Fergie L. Philippe and Gabriell Salgado each have multiple inspired moments in performance. Yet those moments at the upcoming shows in late March and April are likely to be different from the ones that happened during the “Zoetic Schmoetic” debut on Feb. 27, because that’s the nature of improv: No two shows are alike.

The playing area is on the wide landing and stairs situated between Books & Books and the Carnival Studio Theater. Meltzer sits off to one side, manning a bell that indicates a key moment in a game (when the prevailing emotion changes, for instance) or when the game itself is over.

The audience, seated at distanced tables dotted around the plaza, is sometimes prompted to offer suggestions of words or topics, but mostly those watching just applaud or laugh. A lot.

The scenes/games, which make up a 90-minute show, have names such as: Symphony, Bell, Interrogation, Things I Forgot on the Bus, Professor Know-It-All. The actors have to listen to each other, switch course instantly, weave wildly disparate elements and ideas into something comedically cohesive. If you could convert all that adrenaline into rocket fuel, it would probably be enough to power the next SpaceX launch. 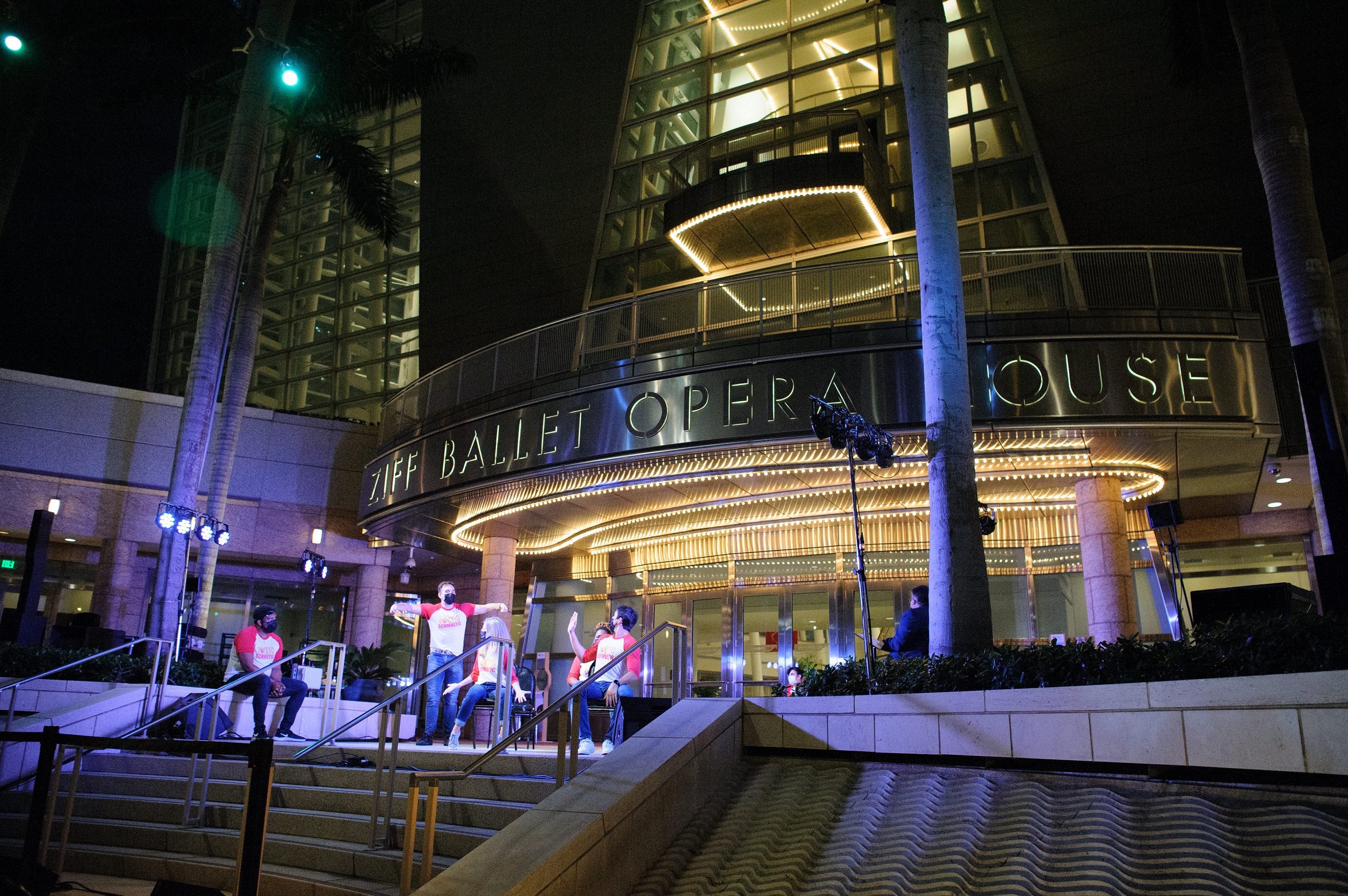 Speaking of which: A car pool game featured Salgado, Hacker, Patrice and Cartland as astronauts on their way to a moon launch, with human sound effects by Philippe.

Salgado’s predominant mood was fear. When Hacker got in the “car” (four chairs, really), the mood instantly shifted to excitement. Then Patrice climbed in the back, bringing with her depression. Finally, a ticklish Cartland got in, causing everyone to giggle and squirm. After that, as each person exited, the mood changed again until Salgado was left all alone with his fear. The improvised dialogue was all space-related, mood-appropriate and funny.

Salgado made periodic appearances as a rapper named Skittles, a guy forced to incorporate audience-suggested words like “spatula” into his rhymes. García and Philippe met at a dog park, summoning their pooches until it became clear that maybe García didn’t actually own a dog. In another scene, Cartland transformed into the previously unknown Miami superhero, Café con Leche Man, to combat the latest national emergency: All the dresses on the planet have disappeared. Goofy? You bet. Hilarious? Heck yes.

Hacker did double duty hopping back and forth in side-by-side restaurant scenes, first sitting opposite García in a fancy French place where the two ex-BFFs tried to mend fences, then hopping over to a literal blind date with Cartland at an eatery where dog food was on the menu.

Cartland played a suspect not privy to the details of a crime (art heist), method (dental floss) and location (Disney World) — but forced to guess all three from clues provided by interrogators Hacker and García. With Patrice, the women played Professor Know-It-All, each taking turns contributing a single word to a not-so-funny, faux NPR-style interview that went on too long.

Then the cast switched it up to put COVID-related lyrics to well-known songs. The performers are all fine singers – Hacker, Cartland and Philippe (who was in “Hamilton” on Broadway) especially so – and you can’t help wishing you could watch them do a full evening of musical improv. And bravo to Matt Corey for his spot-on sound design.

Peter Pan’s Lost Boys and Wendy made an appearance. Cartland and Salgado played a pair of bartenders forced to do ever-more-brief versions of the same improvised scene. Cartland, Salgado and Philippe played members of a middle-school performance art troupe doing a piece about koalas. Then the Simpsons went to family counseling.

Zoetic will doubtless do some tinkering to make “Zoetic Schmoetic” even better before its next back-to-back performances on March 27.

Environmental noises like the sounds of motorcycles revving and roaring along Biscayne Boulevard can’t be eliminated, of course, but tweaks to the sound system to eliminate sporadic garbling or feedback can be made. Masking the actors is safe, and the performers use microphones, but the KN95 facial coverings cover the lower half of their faces, taking away one of the most expressive tools in an actor’s arsenal.

Safety is clearly paramount as performers and audiences gather at the Arsht again. Outside the main box-office area at the Ziff Ballet Opera House, theatergoers have their virtual tickets scanned, get a temperature check, take a quick COVID survey (which can also be done in advance), pass through security, then get shown to their tables, where they can order drinks and food from a menu scanned via their phones. Physically, human interaction is minimized.

But the priceless alchemy of performers giving their all to a delighted, responsive audience is as potent as ever. Cartland has a tradition of doing a morning-after post on his Facebook page after his (usually) wildly successful opening nights, writing simply: “They didn’t boo.”

His post after the “Zoetic Schmoetic” opening added a few words that somehow embodied grief and relief, actor and audience back where they belong: “After over one year … they didn’t boo.”

WHERE: Thomson Plaza for the Arts at Miami’s Adrienne Arsht Center for the Performing Arts, 1300 Biscayne Blvd., Miami