‘MURDER FOR TWO’ AT ACTORS’ PLAYHOUSE ISN’T KILLER, BUT IT GETS THE JOB DONE 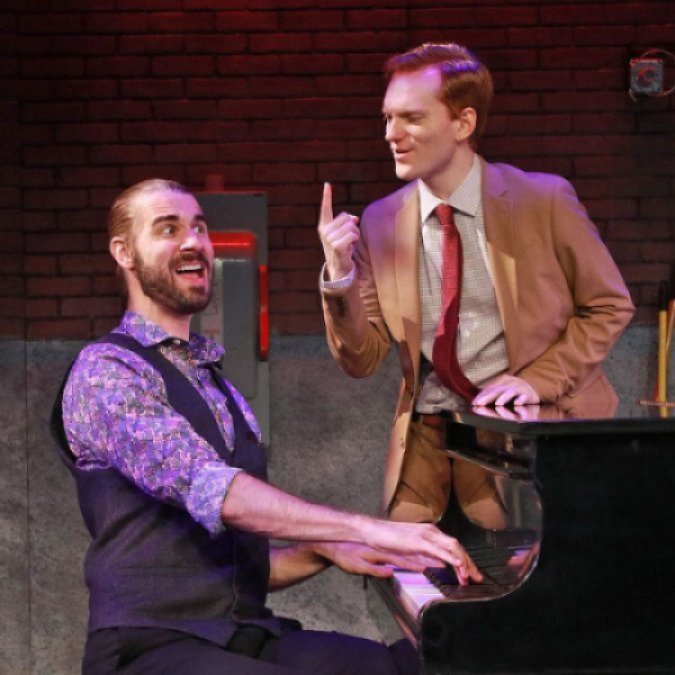 The two-actor, multicharacter musical “Murder for Two” is exactly what Actors’ Playhouse artistic director David Arisco prefers to offer his audiences in the summer. That would be a smaller-scale show in the Miracle Theatre’s more intimate Balcony Theatre space, a piece that aims to do nothing more than supply beat-the-heat entertainment.

The Joe Kinosian-Kellen Blair musical has a history. Created in 2011 in Chicago, where it won the Joseph Jefferson Award as best new musical, the show had an off-Broadway run in 2013, a national tour and multiple regional productions.

Martin Landry, who plays the musical’s multiple suspects and serves as the production’s musical director, made his “Murder for Two” debut in the national tour and performed the show at eight theaters in seven states before hitting the stage in Coral Gables. Mark Schenfisch, who plays an aspiring detective, has also done multiple productions of the show.

That the actors, who must also be excellent pianists, have done the show before is a blessing for a couple of reasons. Schenfisch replaced a previously announced performer just a week before the show opened, and it’s doubtful that someone new to the intricacies of themusical could have mastered it and achieved a chemistry with Landry in such a short time. Moreover, the frenetic, 100-minute plot is already hard enough to follow at times, so the actors’ experience is anchoring and clarifying.

“Murder for Two” mixes a classic, Agatha Christie-like setup with shows such as “The 39 Steps” and “A Gentleman’s Guide to Love & Murder,” in which certain actors play multiple roles. 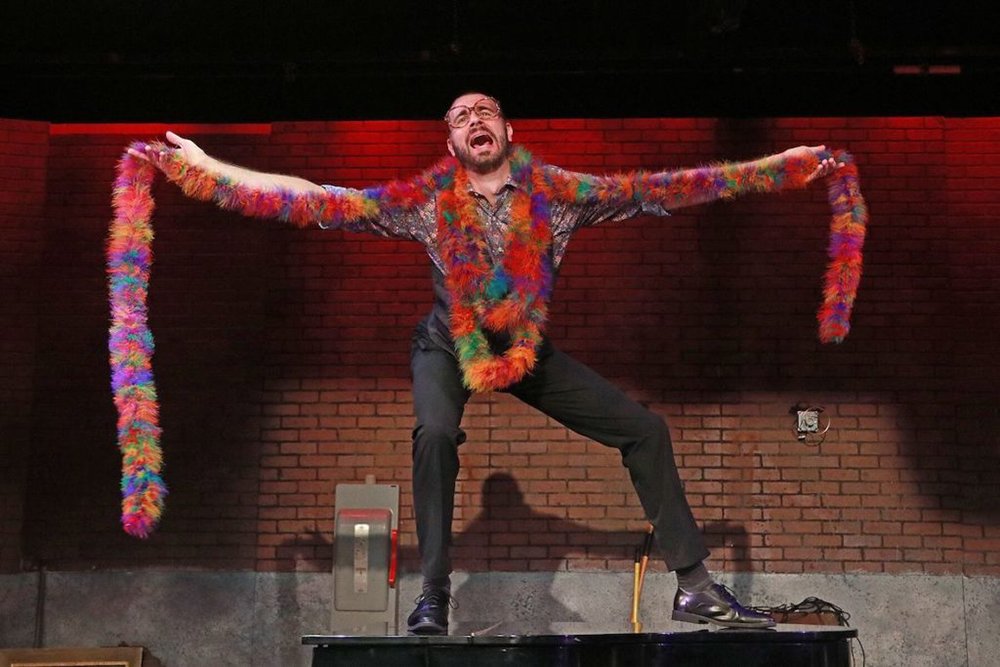 In this case, novelist Arthur Whitney, who turns his friends’ dirty secrets into plot points, is murdered on his way into a surprise birthday party thrown by his show biz-crazy wife, Dahlia. Earnest cop Marcus Moscowicz (Schenfisch) is first to arrive on the scene, and he desperately tries to solve the case before the real detective shows up.

Landry, who has also played Marcus previously, here gets the showy role — or roles. He morphs into all 10 suspects, quickly and repeatedly, with just a pair of glasses, a red baseball cap and (eventually) a boa providing external character cues. Largely, Landry achieves variety through his voice and chameleonic physicality.

Tall and lanky, he sinks to his knees to play three boys, each wearing that red baseball cap a different way (frontward, backward, pulled down low over the face). He plays the seductive and possibly quite dangerous ballerina Barrette Lewis, a woman who “knew” Arthur and Dahlia only too well, and as he stretches out a long leg and gracefully works his hands, he looks more than a little like Mick Fleetwood on the cover of Fleetwood Mac’s “Rumours” album. He argues with himself as both halves of a senior couple, plays an older shrink, and becomes the Whitneys’ grad-student niece, who takes a shine to Marcus.

Both performers grandly play the piano at center stage, sometimes accompanying each other, sometimes playing together in ways both straightforward and showy. Do stick around for their short post-performance display of piano-duo virtuosity.

Both actors sing well, but the show’s music and lyrics? Forgettable even before you exit the theater.

Co-set designers Gene Seyffer and Jodi Dellaventura, lighting designer Eric Nelson, sound designer Shaun Mitchell and costume designer Ellis Tillman collaborate to create the crazy world that Landry and Schenfisch inhabit, and Arisco generally keeps the production’s style and pacing at about an 11 on a 1-to-10 scale. Maybe the show should have been titled “Mayhem for Two.”

Although the plot, music and lyrics of “Murder for Two” are nowhere near stellar, what the talented Landry and Schenfisch bring to the stage fulfills the Actors’ Playhouse summer mission: Don’t think too hard, just enjoy.

ArtburstMiami.com is a nonprofit source of theater, dance, music and performing-arts news. Sign up for our weekly newsletter and never miss a story.