Mirror of Most Value: A Ms. Marvel Play 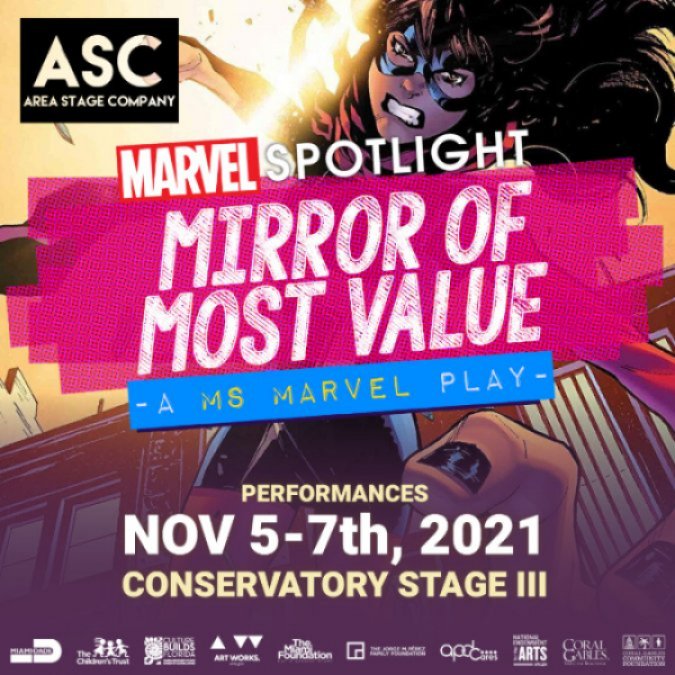 Area Stage Conservatory continues their '21-'22 season with MIRROR OF MOST VALUE A MS. MARVEL PLAY, a contemporary theatrical adventure by Masi Asare within the Marvel Universe.

The show will be running November 5th - 7th 2021 at the ASC Black Box Theatre. ASC’s own Silver Palm Award-Winning Associate Artistic Director, Giancarlo Rodaz, serves as Director and designer for this action-packed production.

Mirror of Most Value kicks off when a strange Terrigen Mist descends upon Jersey City and our heroine, Kamala Khan, is imbued with polymorphic powers. Her life is changed forever, as are the lives of her family and friends. Using her newfound abilities to fight evil and protect Jersey City, she becomes the all-new Ms. Marvel! Kamala attempts to boost Ms. Marvel’s fledgling superhero profile by writing her own fan fiction. But when building a fandom becomes an obsession, Kamala’s schoolwork and relationships begin to suffer. To become the Jersey City hero of her dreams, Kamala must learn to accept herself just as she is – imperfections and all. This production will be performed by a cast of talented, pre-professional ASC Conservatory students, ages 14-19. Bisma Misbah, an ASC Conservatory student of Pakistani descent, will headline the production as Kamala Khan. The young actress is excited to be onboard truthfully representing this strong, diverse, female character.

Following the immense success, and critical acclaim, of his directorial efforts on critically acclaimed Annie in 2021, Shrek The Musical in 2018 & 2021, She Kills Monsters in 2018, The Wizard of Oz and the blockbuster Matilda the Musical in 2019, and his playwriting efforts on 2020’s The Ballad of Janis Matthews and the Dodo Scouts, the young visionary Director Giancarlo Rodaz is fast becoming one of South Florida’s most original and prolific theatrical forces. He has previously presented works at Area Stage Company, MicroTheater Miami, and with his own company Wild Theatre. Florida Theatre On Stage has lauded his work as “imaginative” and “delightful.” The Miami Herald raved, “Rodaz ... creates a magically playful world.” South Florida Theatre Magazine praised Annie as, “one of the most exciting and innovative productions to hit South Florida”.

ASC is proud to be one of the first companies nationwide to present one of Marvel’s Spotlight Plays. In fact, this will be the Florida premiere of Mirror of Most Value. The Marvel Spotlight Plays series, a new partnership between the Concord Theatricals company, Samuel French, and Marvel, is a collection of stage plays featuring superheroes in relatable contemporary situations, aimed at young performers and audiences.