Though thecollection of a half-dozen short plays delivered virtually may seem like a project created in response to this unprecedented moment, “Long Distance Affair” was first devised nine years ago as a way to connect artists and audiences in different parts of the world.

The new joint production from Miami’s Juggerknot Theatre Co. and New York’s PopUP Theatrics – available at longdistanceaffair.info from May 23-30 – just happens to be a trailblazing example of a form that theater may utilize more frequently in the future.

“The world is going in that direction,” says Juggerknot founder and artistic director Tanya Bravo. “Right now, we can’t [easily] fly or go anywhere, but we can connect in this way.”

“Making theater this way won’t be instead of [traditional theater],” adds director Tamilla Woodard, who founded PopUP Theatrics with fellow director Ana Margineanu. “It’s a new vocabulary. It’s in addition to other forms. It lets people who are homebound enjoy live performance.”

This is the seventh iteration of “Long Distance Affair” since the project debuted in New York in 2011. But it’s the first in partnership with Juggerknot, and the first one audiences will access from their homes.

“Long Distance Affair” is made up of solo shows, which have it’s-up-to-you opportunities for interaction and take place in actors’ homes in Miami, New York, London, Paris, Madrid and Singapore.

The plays set in Madrid, London and New York are available as one-on-one experiences costing $15 for a single play or $40 for all three. You can also choose to experience Miami, Singapore or Paris, along with four other audience members selected by the producers, for $11, or visit all three for $30.

Each actor performs his or her play eight times per day, from 7 to 9 p.m. EDT (which means the Europe- and Singapore-based actors are actually performing during the morning of the following day). The artists receive 65 percent of the proceeds from ticket sales, and the two companies share the rest to pay production costs.

All six plays make eclectic use of the medium. 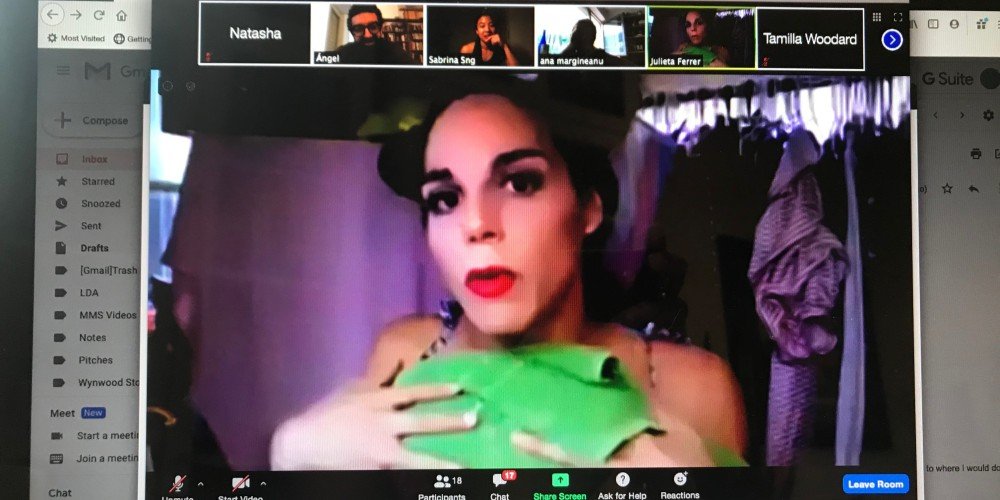 Ella Greenhill’s New York-set play “Cupido,” directed by Tai Thompson, features Dexter McKinney as a Cupid with daddy issues, a funny guy besotted with a mortal he spies through her window.

Jean Tay’s “The Announcement,” directed by Margineanu, is performed in Madrid by Angel Peraba as an angel trying to convince those watching him of a miracle to come. And Lally Katz’s “Rebecca,” directed by David Winitsky, features Rebecca Peyton as a Londoner with a troubled romantic past, a woman who has decided to try Zoom dating.

“I learned how to read Juan’s stuff properly by watching him talk about his own material,” says Romero, whose day job is as director of training for the nonprofit TransSOCIAL Miami. “I’m stoked to do this. I find myself so lucky to fall into these experimental and mold-breaking things. I feel like we’re on the precipice of something. And I get to represent the city. Me!”

“When I write for June, I just hear her. I open myself up to her voice, her vocal rhythms,” Sanchez says. “I like what she’s doing. I’d like to continue writing for her.”

Director Woodard, who calls Romero “an incredible comedienne who underplays in a wide-eyed way with an incredible sense of timing,” says Sanchez’s play will “make people laugh and make them forget they’re sitting in their living rooms.”

Sanchez credits Woodard’s dramaturgical skills with helping him pare down a 12-page first draft to a shorter, more effective piece about a character who is so lonely in isolation that she has taken up a new hobby. He watched multiple makeup tutorials and vlog stories as he was preparing to write.

As Romero says, “Juan found himself down a rabbit hole of tutorial videos and home beautification rituals.”

Woodard speaks with excitement about the challenges and potential of making immersive theater, with the performer working digitally in one city and the at-home audience members scattered around the globe.

“How do you get to know someone after 10 minutes? How do you break through to intimacy?” she asks. “The camera is literally in the hands of the performer, and the director is the cinematographer. So how do you create magic? How do you make the mundane personal? How do you orient and disorient in a way that’s lovely?”

When life as we knew it took its long pause, and live theater stopped, Bravo had to shutter Juggerknot’s successful production of “Miami Motel Stories: North Beach.” At first, she didn’t feel the need to react artistically to the shutdown. But when PopUP got in touch, she became excited about creating a new version of “Long Distance Affair.”

Bravo has worked with both Woodard and Margineanu on different editions of her company’s immersive “Miami Motel Stories.”

“They’re both such amazing directors,” Bravo says. “I’ve never seen anything like the beautiful intimacy they’re able to create through a screen.”