DANCE IN MIAMI IS ALIVE AND THRIVING … OUTDOORS

Dance – a performing art that uses space, superhuman technical skills and artistry – has been relegated during these past quarantine months to kitchens, living rooms and backyards. Dance artists have been stifled, attempting in their various ways to maintain a positive outlook and, most of all, to keep their bodies and technique in check. It has not been an easy time.

Dance films have been created and archived material has been streamed. It is possible to watch a filmed performance of The Royal Ballet from London one second, then watch New York City Ballet the next. Creative filmmaking has thrived. Choreographers who had already been investigating digital formats for dance have found that necessity has pushed them to the forefront. Visual boundaries have been explored and broken.

Still, even with all the creativity and exploration occurring in the virtual realm, dancers have been in lockdown. They have been at home, filming, learning … and waiting for the first opportunity to let their bodies explode in space.

That time has come.

Dance performances are moving outside. From large organizations such as Miami City Ballet to smaller, site-specific choreography, dance is outdoors, where the air is fresh, distancing is possible, space is infinite, and live dance can be seen and can thrive.

As Miami dance icon Brigid Baker said, humorously, “I’d be dancing in a ditch right now if I had to. It’s so important. It’s who we are.”

In normal circumstances, Baker’s Whole Project would be performing in Miami-Dade County Auditorium’s On.Stage Black Box theater. For her company’s Nov. 13 show, Baker moved her work outdoors onto an impromptu stage extending from the auditorium’s loading dock, as part of its Drive-Through Theatre Experience.

“You turn your radio to the soundtrack. It’s like a version of the drive-in,” Baker said.

Baker presented a solo entitled “Crown,” which translates to “Corona” in Spanish and was performed by dancer Amy Trieger. The solo was rich with material and intricacies, an initiation to what Baker feels is a renaissance, a change that is coming. The solo movement is particular to Trieger, who has worked with Baker longer than any other dancer, and it was created to the haunting and soulful music of Arvo Pärt Fratres Version VI for percussion and strings.

Almost as challenging as the solo work itself were the outdoor logistics. Baker always creates natural, handmade sculptures that hang or move as part of her performances.

“There is no crew. To be outside, I had to create something light in structure and able to be disassembled to hang in the space easily. If I thought about what I was doing, I would scare myself,” Baker said. 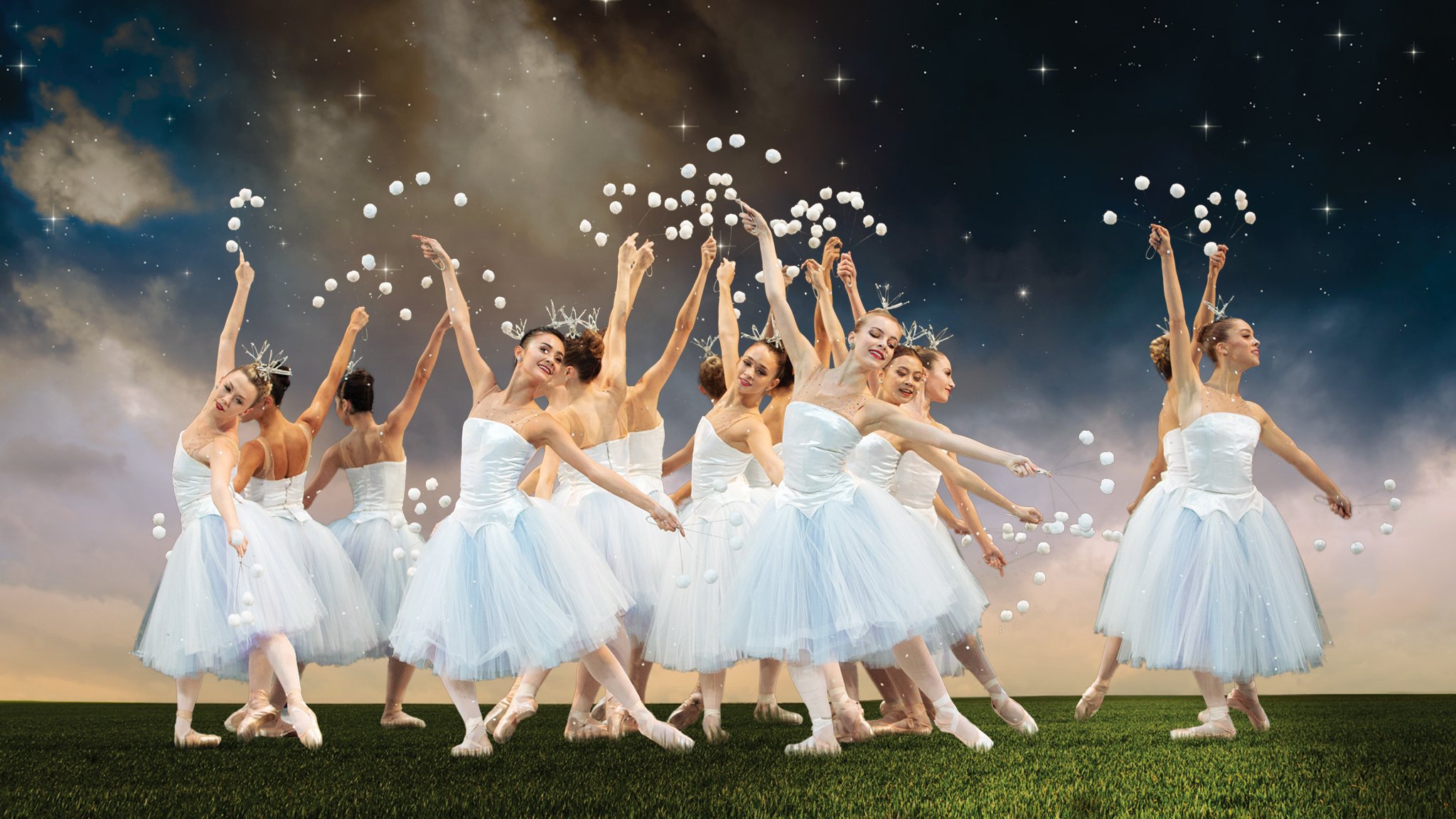 On a much larger scale is Miami’s flagship dance company, Miami City Ballet, which will present Balanchine’s “The Nutcracker” from Dec. 18-31 at Downtown Doral Park.

Miami City Ballet typically presents multiple performances of “The Nutcracker” to packed houses in three South Florida counties. This year, encompassing all the magic and joy of the timeless holiday favorite, “The Nutcracker” will be seen on a huge outdoor stage, complete with an LED screen.

“As a society, everyone is hungry for joy,” said MCB artistic director Lourdes Lopez. “This is a time when comfort, healing and inspiration through the arts are more vital than ever.”

Set for Dec. 18-31, the performances have been organized with support from the City of Doral, Downtown Doral, The Codina Family (from Codina Partners), and Baptist Health South Florida.

“Never have I been part of a project where the government, city officials, a real estate business, medicine and a ballet company have come together to make this performance happen,” she said. “Not one entity could have done it on their own. It was truly everyone coming to the table and saying, ‘How do we make this work?’ This is not just getting on stage and doing a performance outside. This is truly a community event.”

Because so many children will make up the live production, segments will be shown on film. The LED screen will be used to seamlessly weave the live dancing with the projections and video, with the help of the original projection creator, Wendall Harrington.

The dance company is not unfamiliar with performing outdoors. However, performing with many safety protocols adds new layers. Choreography backstage and in front of house is as important as the choreography on stage – it’s a huge job that encompasses permits, barricades, ticket scanning, seating pods, safe markings on the lawn, and the cleaning and disinfecting of everything after each performance.

The city plans to set aside classrooms from a local school to safely house children in the performance, while office space behind the stage will be used as a dressing rooms area for the MCB dancers. Baptist will create testing sites for production staff, dancers, artistic staff and children. Baptist Hospital representatives who oversee COVID-19 safety and testing will come on board to understand how the show works and to ensure that it is done as safely as possible.

“As someone is heaving and breathing backstage, they’re not crossing paths with someone who is about to go on,” Lopez said. “We’re calling it the ‘Safety Start,’ the place where dancers prepare backstage. It’s all choreographed for safety.”

Meanwhile, Hannah Baumgarten and Diego Salterini – the co-artistic directors of Dance NOW! Miami – have shifted the Miami Beach location of their Dec. 13 “Program I” from the closed Colony Theatre to the open-air North Beach Bandshell. This move has provided them with the opportunity to dance outside before an invited live audience while simultaneously livestreaming the performance for ticket-holders.

“The good fortune of living in [the Miami area] allows for open spaces for performances. Necessity becomes a virtue,” Salterini said.

Dance NOW! Miami had much repertory created and rehearsed last year that was never performed, but it couldn’t create a program with that available repertory that would guarantee the 100 percent safety of its dancers. The company decided to drop all repertory it had and create a piece that was shaped by and reflective of the literal, physical and current situation that we’re living.

“We surveyed the dancers to see what level of comfort they have with masks or without masks,” Salterini said. “We know that everyone’s comfort level is not the same. That has made us follow what their level of comfort is as we choreograph.”

The co-choreographers created “This Moment, Here,” a complete work that speaks to what has occurred since those first days of the pandemic.

“People breaking up from stress or distance, falling in love, a depiction of disease, the horrific actions the body has when it attacks itself and eventually kills the person, a reflection on Black Lives Matter, political debates and the lack of agreements in our society. We felt we had to acknowledge where we are,” he says.

The company’s technical director, Bruce Brown, has created a set that keeps dancers at a distance from each other. Salterini and Baumgarten are considering having three different stages or spaces as a reminder that this pandemic isn’t over and maintaining distance is still a necessity.

An outdoor, site-specific venue also was used by choreographer Sandra Portal-Andreu and dancer Samantha Pazos, who last month joined forces to perform, “I am Speaking,” set to a compilation of famous speeches made by women including Maya Angelou, Malala Yousafzai, Ruth Bader Ginsburg, Sojourner Truth and Michelle Obama.

The activation was part of “Miami Vote Float,” which took place Oct. 24 in the parking lot at the Vizcaya Museum and Garden’s garage. The election event was designed to provide early voters with entertainment and to remind them of how much voting matters.

“I personally gravitated to this project not only because of the political climate, but because I felt this was the perfect opportunity to perform in a live open space,” Portal-Andreu said. “Dancing with a mask under the Miami heat and humidity demanded another level of strength and focus, but we paced our performance and channeled each other’s energies to respond to the powerful words that resonated from the speakers.”

Dance NOW! Miami presents Program I featuring, “This Moment, Here,” at 7 p.m. Dec. 13. The show will be filmed at the North Beach Bandshell in Miami Beach and livestreamed via YouTube. Tickets cost $10 and are available at Dancenowmiami.org. Every ticket buyer will receive an email with the livestream link and the concert program. For additional information, call 305-975-8489.