Documentarian Tod Lending goes into his films knowing that he doesn’t know what’s going to happen in them. Longitudinal documentaries, or long docs, are his niche.

“I follow people for years, however long it takes for the story to present itself,” Lending said.

At the heart of his latest – “Saul & Ruby, To Life!” – are two Holocaust survivors, Saul Dreier, 94, of Coconut Creek and Reuwen “Ruby” Sosnowicz, 90, of Delray Beach, and their Holocaust Survivor Band.

The documentary will open the Miami Jewish Film Festival on Jan. 9 at the Aventura Arts & Cultural Center. The festival will run through Jan. 23 at 14 venues throughout Miami-Dade County, and feature more than 100 films from 25 countries.

“Even though I’m Jewish, I’ve never done a Jewish-themed story,” said Lending, 60, a native of Chicago. “I always wondered if I would ever make a film that had a connection to my own background and history.”

He never could’ve imagined where their story would take him.

At first, the film delved into their pasts in Poland and how Dreier found out about Sosnowicz when he wanted to form a Holocaust survivor klezmer band in 2014. Lending began filming in 2015, while the band was playing in community centers and becoming known.

As the film progressed, so did the lives of the two men and the trajectory of the band. On the personal side, the two men lost their wives to illnesses during filming, and on the professional side, they found a way to play their dream concert in Poland.

“We had no idea they would make it to Poland when we began,” Lending said.

The harrowing stories of the Holocaust are interspersed within the film. Dreier tells of how his family was killed by Nazis, and he expresses his wonder on how he was the one who survived.

“To survive is a 99 percent miracle,” he said in the documentary. “Ask me from day to day, I can’t comprehend. The way I was living, the way I was eating.”

In the film, Sosnowicz recalls living in Warsaw’s Jewish quarter: “I had five sisters and four brothers. I was the youngest. When Germany invaded, my father knew how to get out of town.” 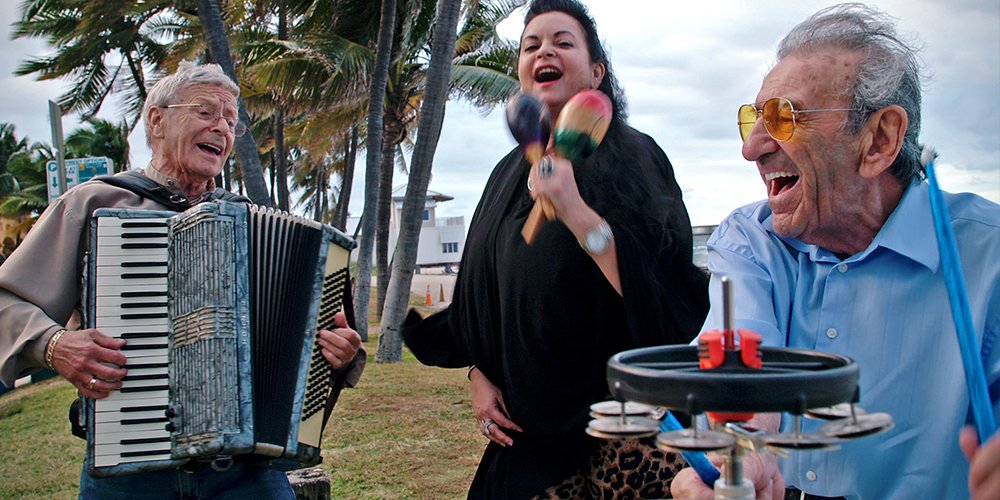 But when they arrived at the Poland-Russia border, the young boy ran the wrong way and lost his family as they crossed the border. A farmer found him and kept him hidden and fed throughout the war.

“Ruby had a different experience than Saul, and both stories will resonate with audiences,” Lending said. “I will always be inspired by these two men and their drive to live and to be connected to the world in spite of what they went through.”

After a friend showed him a short documentary online in the New York Times about the pair, “I fell in love with these two guys,” Lending said. He remembers learning that film companies had already contacted them.

“I was ready to jump on this. I flew to Florida immediately to meet with Saul,” he said.

While he would go through his normal fundraising channels, Lending decided this was the film he had been waiting for. “I had put money aside throughout the years for a passion project, and this was it,” he said.

Lending was intrigued by the Holocaust Survivor Band, made up of survivors and children of survivors.

The idea for the band began when Dreier read a newspaper article about the death of Alice Herz-Sommer, a 110-year-old woman in England who had survived her time in concentration camps by playing piano in concerts the Nazis arranged.

“I want to do something for her,” Dreier recalled thinking. “I’m going to put together a band.”

In 1945, Dreier was 19 and played drums in a displaced persons camp after the U.S. Army liberated him from a concentration camp in Linz, Austria.

“One day, a truck arrived with a piano and a set of drums. The director of the camp asked who wants to play the piano, and a man from Yugoslavia raised his hand. No one wanted to play the drums, so I volunteered,” he said.

He stopped playing the drums, he said, “when I moved to the United States, went to work, got married and had a family.”

Sosnowicz learned to play music at a displaced persons camp in Germany, where he acquired his first accordion. When he migrated to Israel and served in the Israeli Army, he formed a band. When he lived in Paris, he played his accordion in the streets. He later moved to Montreal, then eventually settled in the United States, where he continued to play as a professional musician, including entertaining through the Borscht Belt of upstate New York before retiring to Florida.

“Saul & Ruby, To Life!” already has a distribution deal with Samuel Goldwyn Films, which means it will be shown throughout U.S. movie theaters. It is the 13th feature film to be acquired from the Miami Jewish Film Festival in the past seven years, according to the festival’s director, Igor Shteyrenberg.

Before “Saul & Ruby, To Life!”, Lending completed “Omar & Pete,” which followed two men in the period before their release from prison and then two years after.

“The majority of my work has been on social justice and has always been stories about minorities, drug addiction, incarceration, sexual abuse,” Lending said.

Lending was nominated for an Academy Award in 2001 for his feature-length documentary, “Legacy,” which he filmed over a five-year period, about an African-American family’s struggle and how they overcame community violence, drug addiction and the loss of a child.

What: “Saul & Ruby, To Life!” will open the Miami Jewish Film Festival