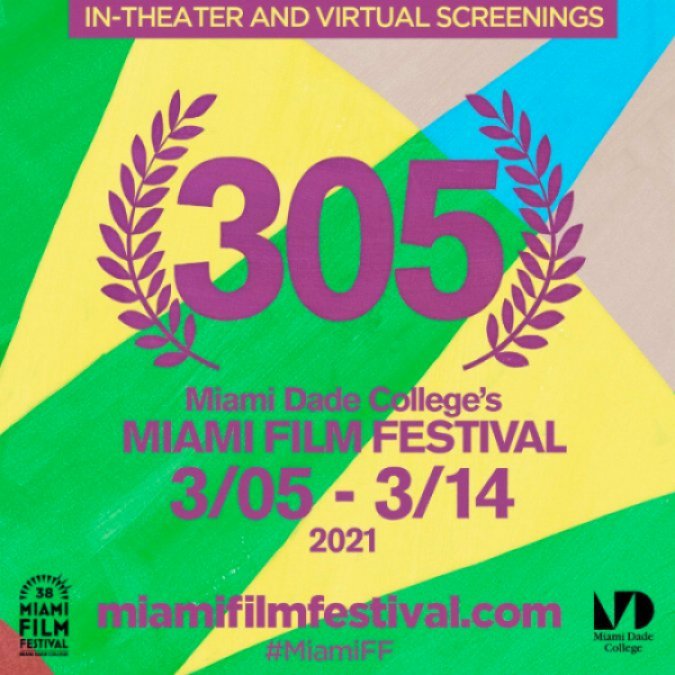 Our favorite film festival is here again! Miami Dade College (MDC)’s acclaimed Miami Film Festival will present its 38th annual edition from March 5 – 14, 2021 in a hybrid format, with both in-theater and virtual presentations.

“In this year like no other, we all long for stability and a sense of continuity,” said Festival Executive Director Jaie Laplante. “By redefining Miami Film Festival for the new era of film, we seek to continue our mission of shining a light on the most outstanding creative talents and new works of the season.”

The Festival will open on Friday, March 5th with the in-theater World Premiere screening of Ludi at host venue Silverspot Cinemas in downtown Miami. The film is directed by Edson Jean, a Haitian-American actor/writer/director and an IFP Narrative Labs alumnus. Ludi follows a private care service worker in Miami as she desperately finagles multiple angles when a half-truth pressures her to send money to family in Haiti. Ludi will compete for both the $40,000 Knight Made in MIA Feature Film Award supported by the John S. & James L. Knight Foundation, and the $10,000 Jordan Ressler First Feature Award. It is the first film to emerge from Miami’s Oolite Arts Microbudget Feature Film Cinematic Arts Residency program, established in 2019.

Also on March 5th, the Festival will virtually present its Precious Gem Master Award to legendary Spanish auteur Pedro Almodóvar, prior to the Miami premiere of his first English-language film, the live-action short “The Human Voice”, starring Tilda Swinton in a tour-de-force performance. “The Human Voice” is based on a theatrical monologue by Jean Cocteau, already a famed part of the Almodóvar oeuvre, having been performed (in Spanish) by actress Carmen Maura in Almodóvar’s masterpiece Law of Desire (1987). The Festival has presented numerous Almodóvar classics in its Official Selection over its 38-year history, beginning with his third feature Dark Habits (Entre tinieblas) at the very first edition of the Festival in 1984. In his 40+ year career, Almodóvar has won two Academy Awards, five British Academy Film Awards, six European Film Awards, two Golden Globe Awards, nine Goya Awards and four prizes at the Cannes Film Festival, where he also served as President of the Jury in 2017. He has received Spain’s Gold Medal of Merit in Fine Arts, France’s Legion of Honor, honorary doctoral degrees from both Harvard University and the University of Oxford, and an Honorary Golden Lion at the 76th Venice Film Festival in 2019.

On March 10th, the Festival will virtually present its Precious Gem Icon Award to Rita Moreno, prior to the Miami premiere of Mariem Pérez Riera’s new documentary, Rita Moreno: Just a Girl Who Decided to Go For It. Filmed two years earlier while Moreno was working on the Latinx reboot of One Day at a Time, the film takes us through her remarkable 70+ year career and the barriers she broke through for generations of Latinx actors who followed in her footsteps. Moreno an EGOT (Emmy, Grammy, Oscar, Tony) winner has also received the Kennedy Center Honor Lifetime Achievement Award, Peabody Career Achievement Award, the SAG Life Achievement as well as the Presidential Medal of Freedom and the National Medal of Arts in addition to many other distinctions.

Aldis Hodge will be recognized for his powerful role as all-time great NFL running back Jim Brown in the drama One Night in Miami, which the ensemble cast was named the 2021 Robert Altman Award winner at the Film Independent Spirit Awards. Hodge’s outstanding individual work have been characterized by a deep sense of integrity to his craft, including his standout roles in The Invisible Man, Clemency, Brian Banks, Hidden Figures, and Straight Outta Compton.

The Festival honors recording star Andra Day’s acting debut in The United States vs. Billie Holiday, for which she received two Golden Globe nominations for Best Actress in a Motion Picture Drama and Best Original Song. Day’s debut will be etched in film history, alongside such legendary debuts as those by Barbra Streisand or Jennifer Hudson. Her powerful, beautiful, and inspiring work as the original “Lady Day” breathes new life into cinema at a pivotal time.

Also on March 6th, Joshua James Richards will receive the Art of Light Award (Cinematographer) for his work on Chloé Zhao’s film Nomadland. Richards has received several regional, national and international awards for the film, including The Camerimage Golden Frog and The National Board of Review for Best Cinematography as well as a nomination from the Film Independent Spirit Awards. He is already a Camerimage Festival winner for his work with Zhao on Songs My Brothers Taught Me and Cannes Directors’ Fortnight Winner The Rider. His celebrated work also includes Francis Lee’s God’s Own Country.

As previously announced, actor Riz Ahmed will receive the Festival’s Impact Award on March 6 for his work illuminating the Recovery community within the Deaf Community, a world often invisible in our society, in the critically-acclaimed Sound of Metal. The Festival will also present a Special Presentation screening of Mogul Mowgli (United Kingdom, directed by Bassam Tariq), in which Ahmed stars, as well as co-wrote and co-produced.

Actor Javier Cámara will receive the Festival’s Precious Gem Award for his career and current role in Fernando Trueba’s El olvido que seremos (Memories of My Father), Colombia’s submission to the 93rd Academy Awards, which will have its US Premiere on March 6 at the Festival as a Marquee Special Presentation.

The Festival will close with the World premiere of Jayme Gersen’s documentary Birthright, which which follows Miami-bred electro-pop musicians Afrobeta as they are invited to perform in Havana, Cuba. The duo’s desire to visit their parents’ homeland ignites a surreal journey into who they are, where they come from and what being Cuban really means. Birthright will compete for both the $40,000 Knight Made in MIA Feature Film Award supported by Knight Foundation and the Festival’s Documentary Achievement Award. Gershen is a previous winner in the Knight Made in MIA Award category for her 2019 short film “Six Degrees of Immigration”, which was selected by The New York Times’ Op-Docs program and acquired for broadcast by PBS.

Knight Heroes, a popular program created with the support of Knight Foundation, will return for its third consecutive year with a new format and a virtual platform. Two bold and bright talents will share their insights, observations and advice about their creative paths and future outlooks – through a conversation with their own creative heroes. This year’s edition features filmmaker Radha Blank (The Forty-Year Version) with her inspiration Gina Price-Bythewood (Beyond the Lights, The Old Guard) and filmmaker Amy Seimetz (She Dies Tomorrow) accompanied by producer Adele Romanski (Moonlight, Never Really Sometimes Always).

Special Presentations of the Festival include three films of exceptional significance to Miami’s large Cuban diaspora community. Plantados (United States, directed by Lilo Vilaplana, North American premiere) tells the true story of political prisoners tortured in Cuban prisons in the 1960s before their eventual exile to Miami; A New Dawn (United States, directed by Manny Soto, US Premiere), is a documentary where Miami Cubans share their fraught stories of leaving their former homeland; and Revolution Rent (United States, Cuba, directed by Victor Patrick Alvarez and Andy Señor Jr.), is a documentary by first-generation Miami Cuban Andy Señor who became a Broadway star and his complicated journey to bring a production of the musical Rent to life in Cuba. Revolution Rent will finally make its Miami debut at this year’s Festival, after being cancelled last year due to the pandemic.

Individual tickets for all Festival events will go on sale to the general public beginning February 11. Festival members have the opportunity for pre-buy. For more information, visit miamifilmfestival.com or call 305-237-FILM (3456).