Covered with bottles of wine and wine accessories, there's no question from the get go that Cooper's Hawk is as much about wine as it is about food.

Still, for those who might not give a grape about wine, the food stands on its own.

So, if you are inclined to go for the wines, this is the place. There's a sommelier who asks guests what kind of wines they prefer, then recommends a bottle for the table based on the comments. Or, if you prefer, they can suggest a by the glass. We were treated to the member exclusive, California red wine Vin Noir, which was the restaurant's wine of the month selection.

Stick to the wines, however. The Island mojito made from Malibu rum, passion fruit, mint, and lime looked good on paper. It was fine, yet mediocre. 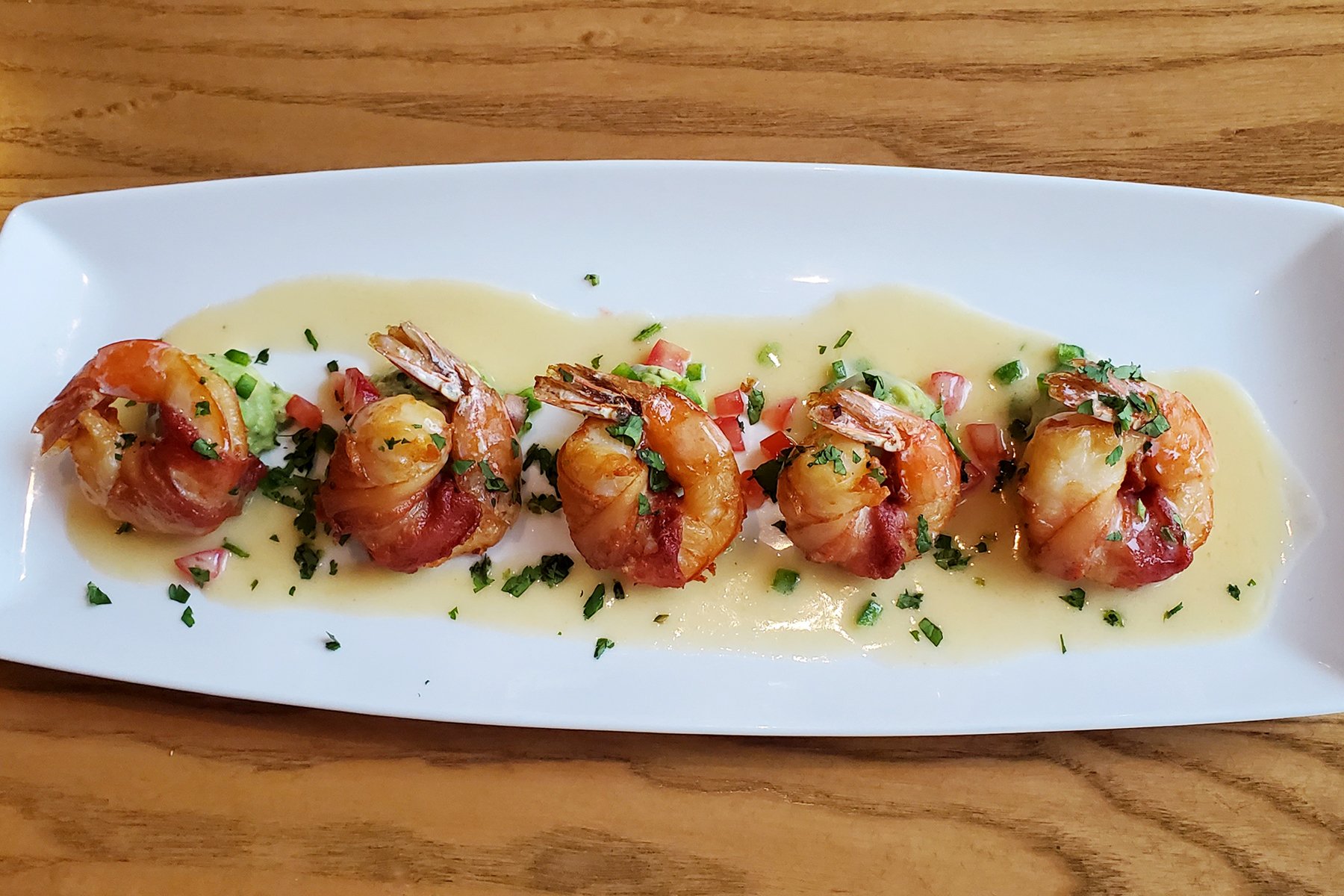 They do use liquor, tequila specifically, in their Mexican drunk shrimp, which we ordered as an appetizer. Shrimp is wrapped in bacon, then covered with a tequila lime butter sauce and served with fresh guacamole for dipping.

The shrimp were cooked to perfection and although you might think the bacon might not be crispy because of it being wrapped around the shrimp, it was, which created an appealing texture combination, the buttery shrimp and the crunchy bacon.

The tequila lime butter added a bit of richness, yet imbued acidity, and along with the guacamole, the whole plate came together. 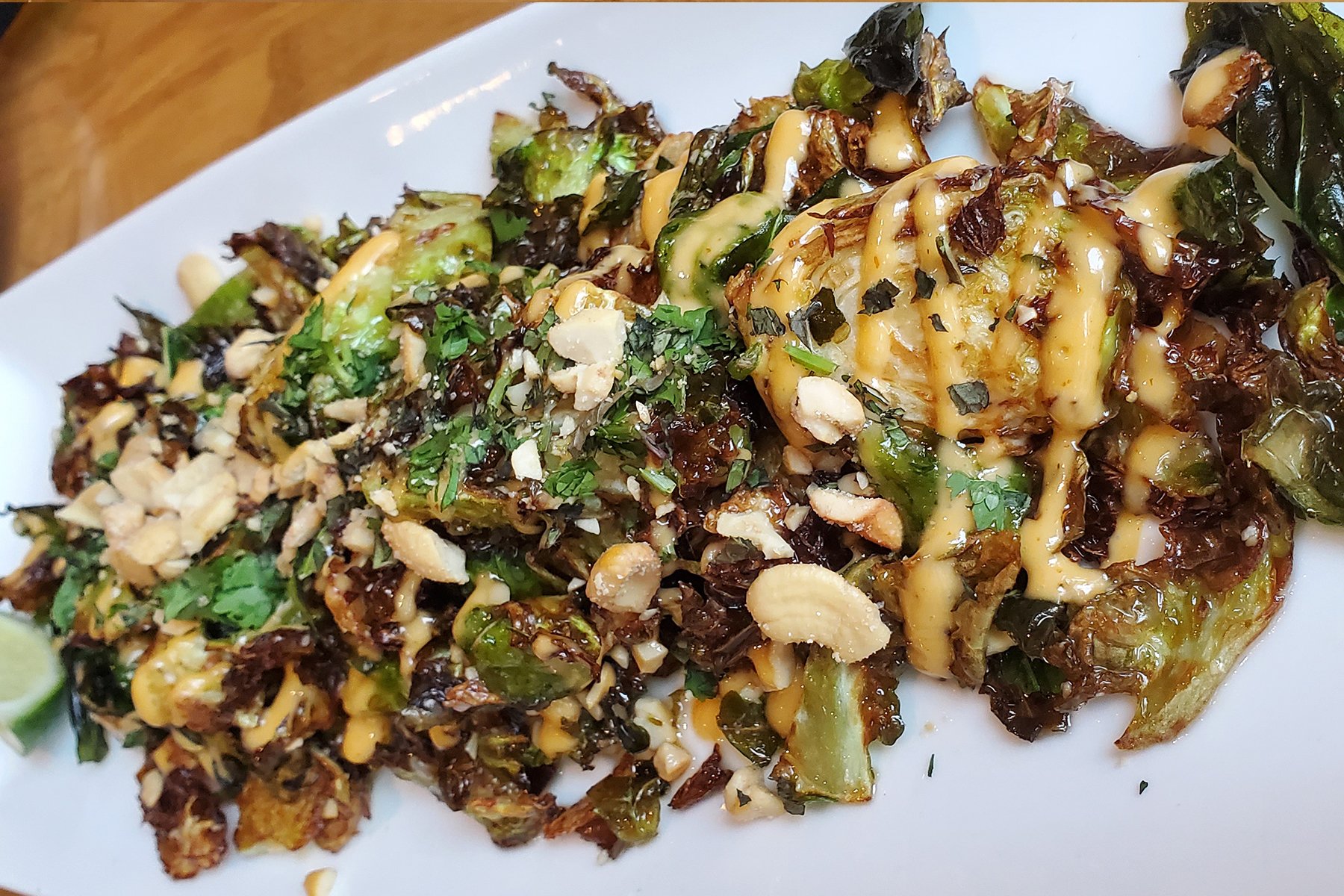 Brussel sprouts are one of those vegetables that doesn't usually top a "must eat" list and we were ready to bypass the appetizer, but they came highly recommended. After the first taste, it was clear why. Crispy and tossed in a sweet Thai sesame siracha aioli, the Asian influenced flavors were complex. Cashews added a savory element and elevated an already explosive dish.

Then onto the entrée menu, which is packed with choices. We settled on a selection of three very different entrees, which yielded opportunity for diverse flavors.

First, the fish, which was a pan-roasted barramundi with a Thai lemongrass sauced, served with blistered green beans, grape tomatoes, and ginger rice.

More Thai influence here, but interestingly the lemongrass sauce was reminiscent of a red curry, yet more subtle. The fish arrived cooked to perfection: Crispy on the outside, while inside, the white fish was succulent, meaty and sweet. The side of ginger rice complemented the flavors of the main course.

For pasta, it was Keaton's spaghetti and house-made meatballs. The spaghetti used was a bucatini pasta. Bucatini looks like spaghetti but is thicker and has a small hole that runs through the noodle. What happens is that the hollow center gets filled with sauce. In this case, it's a rich tomato Bolognese that would make any Italian mama proud. And, just right, the bucatini was served al dente. The meatballs are made of pork and Italian sausage and are a tad on the spicy side, yet perfectly balanced. And, yes, like the dish's title suggests, they do taste homemade.

On the beef side, it was red wine braised short rib, which is served on top of rustic mashed potatoes. Here they are called Mary's Potatoes, which, note from chef – it's a family recipe. Tender ribs, which don't even require a knife to cut, melt in your mouth. The dish has been on the menu since the first Cooper's Hawk opened in 2005 and no wonder it's still a fan favorite. Mary's Potatoes are to die for, especially as they soak up the rich braising liquid at the bottom of the dish from the ribs. Also in the mix are oven- roasted vegetables and crispy onion strings on top.

For dessert, the ginger spiced carrot cake was a perfect ending. Sweet, but not overwhelming, the cake was served cold so the icing was more like ice cream. Three layers of moist cake with a cream cheese frosting and a hint of cinnamon and ginger in every bite is a delight.

Cooper's Hawk Restaurant and Winery has a lot on its menu and the wait staff is on their game, yet they still manage to be friendly. Service is top notch and everyone is knowledgeable about the menu and wine offerings.

Overall, the food is complex in flavors, yet not too over the top, and the presentation makes everything look as good as it tastes.